The exhibition is conceived of as an ongoing performance where visitors realize a series of compositions using sonic headdresses, invented instruments, and graphic notation. 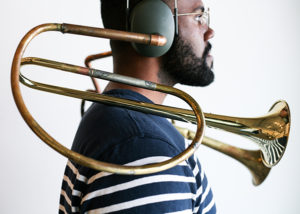 Stever Parker is an artist, musician, and curator who creates communal, democratic work to examine history, systems, and behavior. His projects include elaborate civic rituals for humans, animals, and machines; listening sculptures modeled after obsolete surveillance tools; and cathartic transportation symphonies for operators of cars, pedicabs, and bicycles. He is the recipient of the 2018 Tito’s Art Prize, a Fulbright Fellowship, a Harrington Fellowship, the Best of Austin Award, and the Austin Critics’ Table Award.

Parker has exhibited and performed at institutions, public spaces, and festivals internationally. Highlights include Art Basel Miami Beach, the Lucerne Festival (Switzerland), MASS MoCA, the Lincoln Center Festival, the Crystal Bridges Museum of American Art, the Guggenheim Museum, the Fusebox Festival, Tanglewood, Los Angeles Philharmonic inSIGHT, SXSW, the Stone, Contemporary Arts Center (New Orleans), the Blanton Museum of Art (Austin), the Asian Arts Initiative (Philadelphia), The Contemporary Austin, Bowerbird, and the Gene Siskel Film Center (Chicago). As a soloist and as an artist of NYC-based “new music dream team” Ensemble Signal, he has premiered 200+ new works. His projects have been reviewed by the New York Times, New Music Box, and Sightlines, among others.

Parker has been awarded support from the National Endowment for the Arts, New Music USA, the Copland Foundation, the Puffin Foundation, and the Mid America Arts Alliance. He is the Curator of SoundSpace at the Blanton Museum of Art, Executive Director of Collide Arts, and a full-time faculty member at UT San Antonio. He holds degrees in Math and Music from Oberlin, Rice, and UT Austin.

Louise Dam Eckardt Jensen is a Danish-American saxophonist, vocalist and composer whose anti-authoritarian approach has led to her to a sort of bi-coastal career where she thrives simultaneously in the dense and claustrophobic environment of New York City and the idyll of the southern Danish countryside.

She has toured extensively throughout the continental United States and Europe and has performed with musicians as diverse as Weasel Walter, Marc Ducret, Jim Black, Tim Dahl, Erica Dicker and Poul Dissing. She co-runs the Denmark-based label Marsken Records with husband Tom Blancarte.

A native of the Texas Hill Country in Austin, Texas, his formative years included a steady diet of fantasy and sci-fi novels, comic books and video games, and later on a total immersion in death and black metal. Accordingly, Blancarte has cultivated a demented and visceral instrumental practice that transcends the experimental bass canon and pushes improvisatory art to new extremes. He has toured extensively throughout Europe and North America, playing venues that range from dingy squatted basements to international festivals.