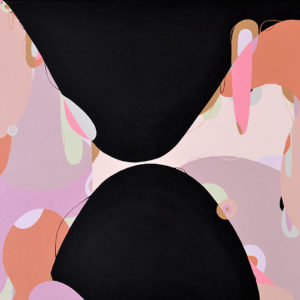 Fernando Andrade (b. 1987) was born in the border town of Acuña, MX, and relocated to San Antonio, TX, at the age of seven. As an artist, Andrade works in two distinct bodies of work: representational drawings and abstract paintings. In his drawings, simple narratives are created by using figures and objects to explore current sociopolitical events or personal family stories, as portrayed in the series La Patria.

In contrast, his abstract paintings are improvised and organic colorful compositions. He views the process as therapeutic, allowing himself to imagine space, arrangement, and rhythmic affinities, which to him celebrate life itself.

Transitions: Line and Color was inspired by Malcolm Gladwell’s book Blink: The Power of Thinking Without Thinking, and the theory that “There can be as much value in the blink of an eye as in months of rational analysis.” In this exhibition, Andrade shares his process with the viewer, giving a glimpse of the conversations that take place in his daily studio practice. As Andrade explains,

I believe that doubt is always in the back of our minds; one can argue more so in the creative process. Sometimes it is just a matter of putting the pieces together and working through a set of problems. I’m interested in letting the subconscious lead to concepts that will fully evolve in time.

Being open to working with colorful abstract paintings, graphite on spam mail envelopes, or even stitching on paper help Andrade discover and explore new concepts but, most importantly, stay actively connected to what he values most, the freedom to create.

Joe Peña (b. 1971) was born in Laredo and raised in Corpus Christi, TX, where he received his MFA from Texas A&M University (TAMUCC) in 2005. In 2011, Peña returned to TAMUCC as the Associate Professor of Art with a concentration in Painting. Peña’s work explores elements of ethnic identity, including aspects of cultural, familial, and social notions relating to his Mexican heritage. The subject matter, portrayed through various elements of still life, portraiture, and urban nightscapes, is a further reference and exploration into personal narratives, as well as traditional and contemporary Mexican customs.

The Last Stop: Nightscape Series could be viewed as an extension of Peña’s string of raw meat paintings that included lengua, tripas, and mollejas that he associates with his Mexican culture and upbringing. This latest series of paintings began with a late-night visit to a local food truck that he often frequents.

The streetlight that generally illuminated the area was out of order, and the only light visible was the glow coming from inside the truck. While not necessarily unusual in itself, from a distance, this view gave the truck the appearance of it almost hovering in the rich black emptiness of space. It was a mysterious and surreal scene and began an exploration of the use of urban nightscapes as a metaphor for the idea of home as a sense of place, not just a physical location.

It’s these comforts of home that bring out the best in Peña, the humble meat cuts, South Texas home cooking, and the unassuming food trucks and restaurants that light the way home.