Help support Presa House Gallery exhibitions and programming by purchasing one of our Official T-Shirt designed by artists Albert Alvarez, Alexandria Canchola, and Gilbert Martinez. The T-Shirts are available while supplies last for $20.00 plus tax with an additional $6.00 for shipping, delivery and curbside is available in the San Antonio metro area.

The Alexandria Canchola T-Shirt is currently available IN WOMEN SIZES ONLY. Beyond consistently highlighting the work of local artists via exhibitions year-round, Presa House co-directors Rigoberto Luna and Jenelle Esparza do a commendable job of introducing gallery-goers to artists living and working in other cities, including Brownsville, New York and Los Angeles.

For their final hurrah of 2018, the Southtown gallery collaborated with Coka Treviño on Degradado (Gradient) — a group show uniting unrelated artists from two creative communities the curator holds dear: Austin and Monterrey, Mexico.

Organized as a means to “promote one another, build relationships, create new exhibition opportunities, share ideas, gain new insights and bridge communities through the arts,” Presa House’s March, 2018 group show K Space in the House  welcomed more than 30 Corpus Christi-based artists, many of whom were showing in San Antonio for the first time.

Essentially the flipside of that cultural exchange with K Space Contemporary, the forthcoming exhibition Ctrl+A promises to give Corpus a broad sampling of San Antonio’s thriving art scene. Named after the keyboard shortcut for “select all,” the sprawling group show also includes artists from Houston, Austin, Brownsville, Corpus, Los Angeles and Monterrey. As Luna sees it, “Ctrl+A” is “in many ways is a complete overview of all of the talented artists we’ve been fortunate enough to host in our space in San Antonio. The hope is not only to cut and paste our artists into the wonderful exhibition spaces of K Space Contemporary and K Space Art Studios but we also hope to bring the overall experience and energy that we put into each of our exhibitions at Presa House.”

the forthcoming exhibition Ctrl+A promises to give Corpus a broad sampling of San Antonio’s thriving art scene. Named after the keyboard shortcut for “select all,” the sprawling group show also includes artists from Houston, Austin, Brownsville, Corpus, Los Angeles and Monterrey. As Luna sees it, Ctrl+A is “in many ways is a complete overview of all of the talented artists we’ve been fortunate enough to host in our space in San Antonio. The hope is not only to cut and paste our artists into the wonderful exhibition spaces of K Space and K Space studios but we also hope to bring the overall experience and energy that we put into each of our exhibitions at Presa House.” 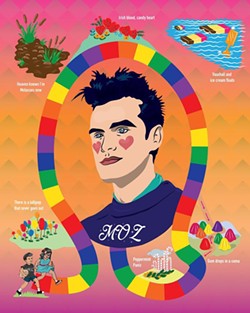 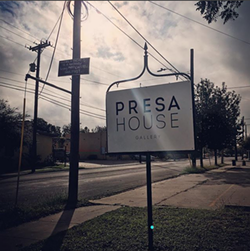