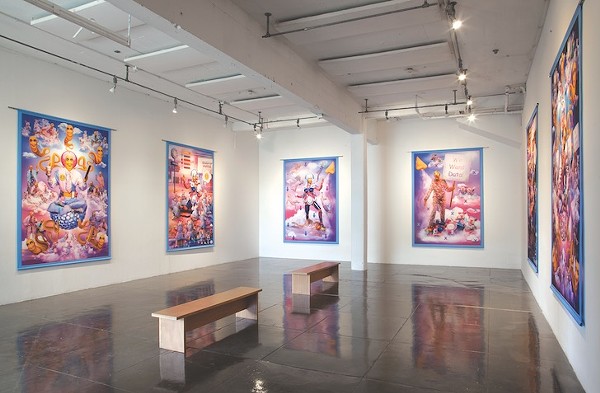 Artpace // Within the confines of a former Hudson automobile dealership, anything is possible, and that’s the way Linda Pace wanted it. Pace opened the doors to Artpace with the intent to nurture artists’ “freedom to dream,” and engage locals with an innovative, international art world; her space was to be a playground of possibility for all parties. Even though Pace passed away in 2007, her legacy lives on through this unparalleled institution that annually hosts three trios of resident artists (one Texas-based, one national and one international) as well as varied group and solo exhibitions in the Hudson Showroom and newly branded Main Space. 445 N. Main Ave., (210) 212-4900, artpace.org.

Blue Star Contemporary // A shining example of making lemonade from life’s lemons, Blue Star Contemporary rose from the ashes of a group exhibition the San Antonio Museum of Art canceled back in 1986. Both the anchor of the Blue Star Arts Complex and a symbol of the independent spirit of San Antonio’s art scene, BSC and its innovative programming extend beyond gallery walls via a Berlin residency and collaborations with the San Antonio Botanical Garden, Trinity University and the San Antonio International Airport. Freshly reopened after an exterior facelift that gave its spare, industrial digs a sleek new entrance, the pioneering art space is thriving under the direction of Mary Heathcott and rightfully celebrating 30 years of championing local artists. 116 Blue Star, (210) 227-6960, bluestarart.org.

Cinnabar // Since opening its doors in September 2013 with an exhibition of large-scale nudes by Wimberley-based photographer George Kraus, Cinnabar has established itself as a gallery to watch, picking up approving nods from Artforum and Garden & Gun while building an eclectic roster of local, regional, national and international artists and collaborators. Founded by jeweler Susan Oliver Heard and named after a deep red (and poisonous) mineral, Cinnabar scored the title of Best Gallery in our 2014 readers’ poll and continues to mount high-quality exhibitions that often put an unexpected spin on universal themes. 1420 S. Alamo St., Suite 147, (210) 557-6073, cinnabarart.com.

Gravelmouth Gallery // Opened in 2011 by muralist and contemporary artist David “Shek” Vega, Gravelmouth stands out as a street-smart leader among the cluster of galleries that light up Second Saturday celebrations in the 1906 South Flores arts complex. One half of the sought-after mural duo Los Otros (the other being Nik Soupé), Vega made big waves in 2016 as curator of Mexic-Arte Museum’s “[email protected]” — the 21st edition of the Austin-based institution’s Young Latino Artists (YLA) exhibition series. Encompassing traditional painting, installations, photography and digital media, the show accentuated Gravelmouth’s practice of championing street art and other nontraditional forms of creative expression. 1906 S. Flores St., gravelmouthgallery.com.

Hello Studio // Whereas some artist-run spaces stick to a strictly San Antonio-based roster, Amada Claire Miller and Justin Korver’s Hello Studio thoughtfully shakes things up with exhibitions showcasing “emerging visual artists in and around Texas.” Since upgrading to a larger Blue Star space in the the Upstairs Studios, the gallery has branched out by introducing a residency program that provides selected artists with studio and exhibition space. 1420 S. Alamo St., Building B, Suite 203, hellostudiosa.com.

Lawrence Markey // Among the more refined art-viewing experiences one can find in these parts, Lawrence Markey operated in New York City for 25 years before relocating to San Antonio back in 2005. Anything but splashy or provocative, exhibitions here often invite viewers to stop and ponder pensive works on paper created by the likes of Fred Sandback, James Castle, Suzan Frecon and Robert Moskowitz. 200 E. Grayson St., (210) 228-9966, lawrencemarkey.com.

Presa House Gallery // Despite an unassuming facade one could easily mistake for a private residence (built in 1910), Presa House Gallery packs a well-executed punch with monthly offerings that run the gamut from themed group shows to solo exhibitions for emerging and mid-career artists. Headed by “a collective group of artists” that includes local movers and shakers Rigoberto Luna and Jenelle Esparza, the gallery has swiftly established itself as a First Friday spot to watch via group exhibitions like 2016’s timely “Borderwavve” and the Rolando Briseño showcase “Sex, Race, Science.” 725 S. Presa St., presahouse.com.

Ruiz-Healy Art // Incorporated in 2004 as a by-appointment-only outfit and opened to the public in 2013 in the heart of Olmos Park, Patricia Ruiz-Healy’s gallery represents both local and international artists while emphasizing “a Latin American, borderland, and Texas discourse.” One of three Texas members of the esteemed International Fine Print Dealers Association (IFPDA), the gallery actively participates in art fairs in Houston, Dallas, Miami and New York. Beloved for shows that combine local and foreign talent with regional themes and big-city aesthetics, Ruiz-Healy Art showcases legends and emerging artists alike and also acts as the exclusive representative of the estate of late local hero Chuck Ramirez. 201-A E. Olmos Drive, (210) 804-2219, ruizhealyart.com.

Southwest School of Art // Following its foundation as a nonprofit in 1965 and relocation to the historic Ursuline Convent and Academy in 1971, the Southwest Craft Center (known as the Southwest School of Art since 2010) expanded its campus by taking over a Sears Automotive Center in 1998 and rolled out an “intimate, intensive college degree program” in 2014. Now designated as the Lone Star State’s first and only independent art college, the SSA hosts regular exhibitions of contemporary works by regional, national and international artists (as well as faculty and students) in the Navarro Campus’ museum-like Russell Hill Rogers Galleries and San Antonio Express-News Photography Gallery as well as the quaint Ursuline Hall Gallery across the way on the historic Ursuline Campus. 300 Augusta St., (210) 224-1848, swschool.org.

Andie Flores is a visual and performance artist, writer and comedian currently in her second year as…

Although often considered a solo endeavor for singer, producer and multi-instrumentalist Chazwick Br…

For some youth artists at San Anto Cultural Arts, the first time they’ll be inside of an art gallery…