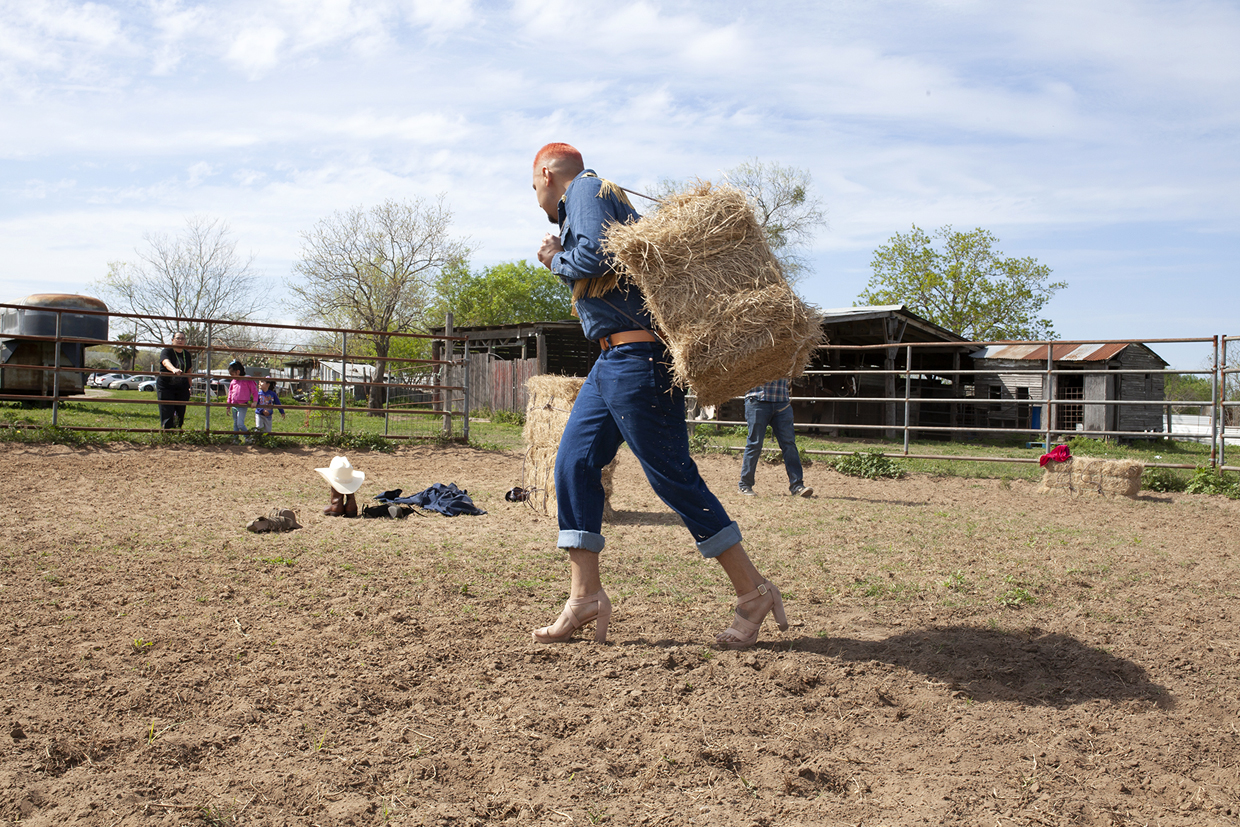 Jose Villalobos was born and raised in the El Paso/Juarez region, steeped in the canonically masculine and generally conservative western and Norteño culture. His current show, Cicatrices, at Presa House Gallery in San Antonio (through March 30) applies a lens of gay and transgressive identity to archetypical symbols — the hooves of deer are manicured and nail-polished, cowboy boots are cast in glycerine (aka soap) and scented with rose or lavender. Villalobos’ work uncoils these totems erotically, as if they had been waiting in some stultifying sepia malaise for their Technicolor arrival.

Part of Villalobos’ practice involves his highly rigorous, ritualized performances, and on Sunday March 17, he performed at Rigoberto Luna’s family ranch south of San Antonio. (Luna is the co-founder and curator of Presa House Gallery with his partner Jenelle Esparza.) There is an endearing risk with doing these kind of high-concept, challenging, and intimate performances in unlikely locations. Quite simply: the deck is stacked against you. An audience may not show, the weather may mock your aspirations, and that elusive vibe of communion and a general frisson of reverence that could be described as liturgical might not materialize. It can end in folly. But sometimes, as on that Sunday, the elements align. It was a perfect spring day; the clouds plumed and froze like marble. People showed up. Norteño and Tejano music played on the PA. Luna’s mother prepared perhaps the best rice, beans, and guacamole I’ve ever tasted. 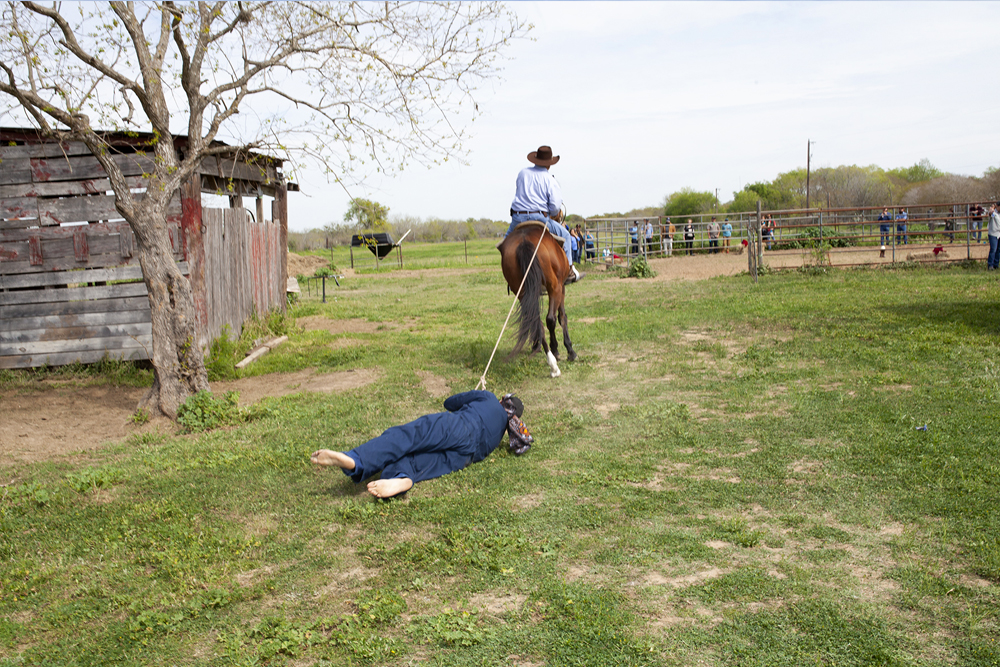 Then the performance began. Villalobos, barefoot, wearing denim with yellow fringes, was dragged across the ground by Rigo’s father’s horse into the corral. Villalobos has a preternatural gift to swing fluidly from cultural symbolism to psychology in his imagery. Immediately this introduction conjured thoughts of black people, Latinos, and Native Americans dragged through the desert — a legacy of conquest and murder. But there is simultaneously a striking and universal emotional resonance too — the recognition of being dragged into something, or dragged through the very shit of existence. 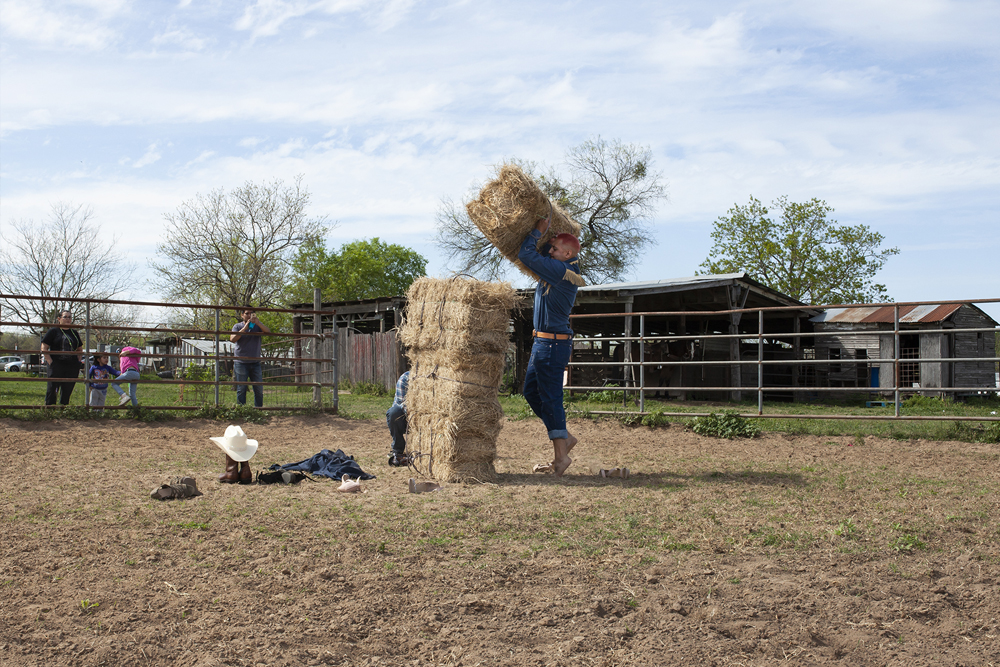 Inside the pen, there were four bales of hay positioned at the arcs of the enclosure , and each bale supported a pair of women’s shoes hidden under red velvet. The tableau had an elegant, sun-baked surrealism of de Chirico and Jodorowsky. Villalobos proceeded to uncover each pair of shoes, put them on, hoist the heavy bale on his back and stagger to the center of the corral, where he stacked the bales and cut the shoes off his feet with a switchblade. The repetition and release of this sequence was deeply cathartic. It spoke to the weight that women and LGBTQ people carry, and the relief that comes when that weight is dropped, even if temporarily. Standing behind him as he hoisted a bale, hay fluttered in the air like gold filings, and it was like a still from a film, realized in front of us. Performance art, when it clicks, becomes instantaneously cinematic and mythic. 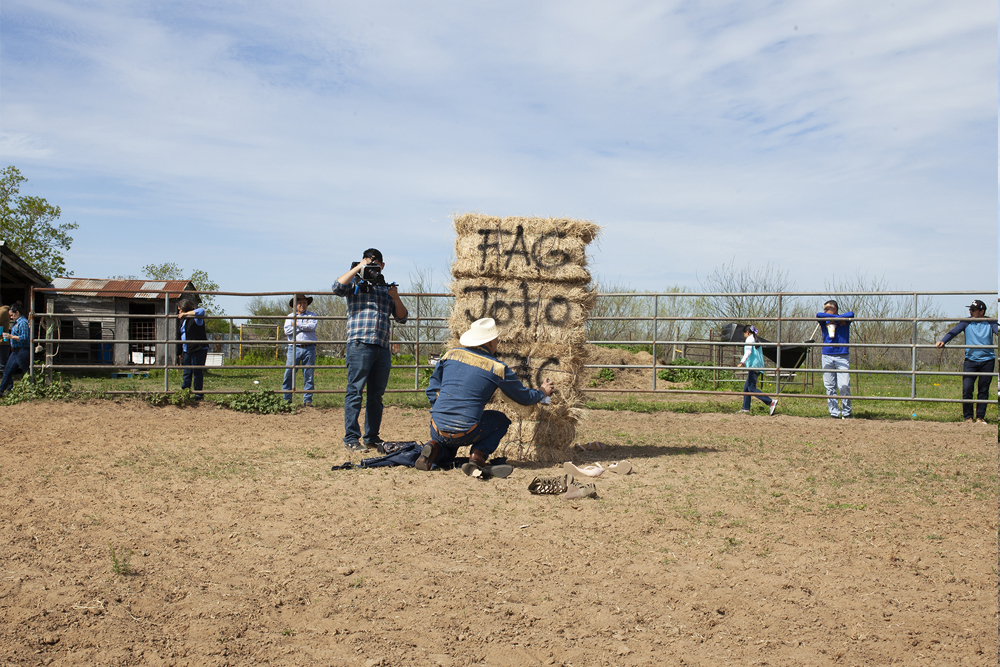 Once the hay was stacked and formed a wall, Villalobos put on cowboy boots and a hat and proceeded to spray paint the gay slurs “Fag” and “Joto” onto the hay, before running full bore into the wall and scattering the hay. He then painfully stuffed hay into his shirt, creating an exaggerated hay gut. This was Villalobos becoming a literal straw man of masculinity, the intrinsic chafe in assuming that illusory stance. 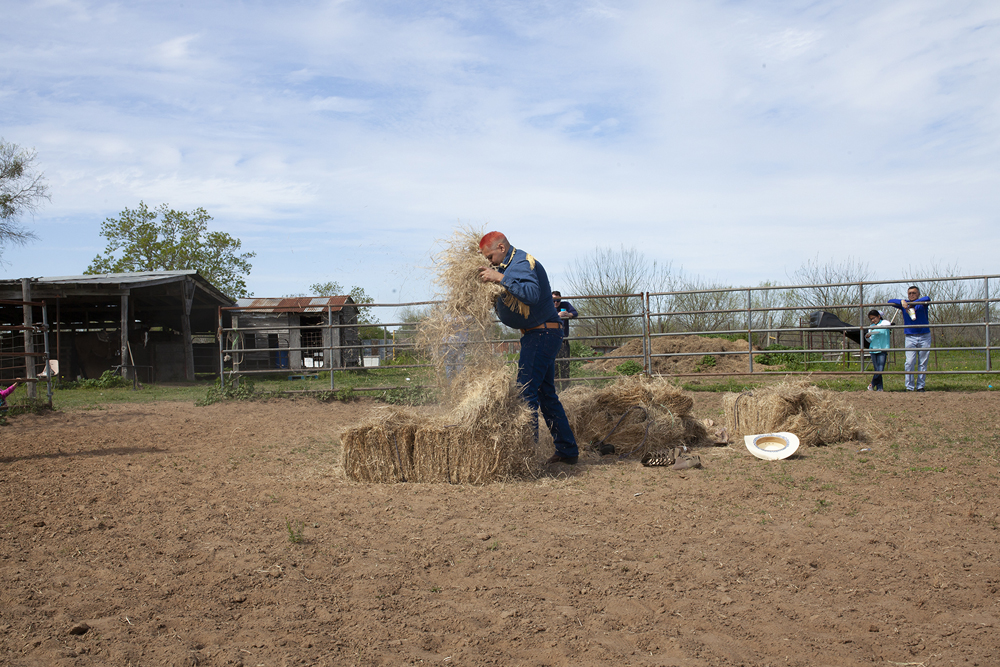 In about 30 minutes, Villalobos had created a near-perfect and haunting cycle that meditated on racism, gender, the weight of the past hanging on one’s back — the universal desire to knock the walls down, cut the binds off, drop the mask, and be free.

Jose Villalobos will perform a final performance at the closing of ‘Cicatrices’ the evening of March 30 at Presa House Gallery, San Antonio.

Dress it down enamel

Despite its melancholy overtones and references to “bad memories” and a relationship that never was,…

By Michael Agresta | December 13, 2021 The Rio Grande Valley is not one of the easier places in Amer…