At Presa House through November 30 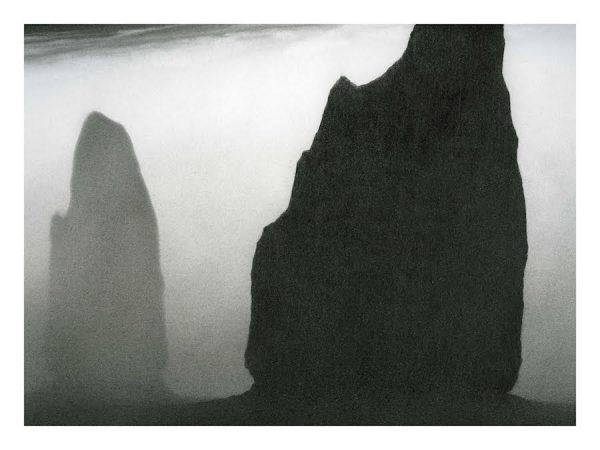 Corpus Christi has an emerging (and delightfully surprising) graphite scene. There’s Ashley Thomas, whose exquisitely detailed dreamy works of botanica candles, ribbons, and fringed leather jackets conjure a personal yet evocative landscape of memory and symbols; Jimmy Pena creates sensual, haunting works of mortality and the human body; and Jorge Alegría, in his exhibition at Presa House, uses the sensitive responsiveness of graphite to create imaginative and fantastical terrains.

Alegría has a clear interest in sci-fi and fantasy. Some of the pieces directly reference sci-fi legends like Dune; other pieces use a kind of cubic, particulate style to give the works a sort of analog-digital aesthetic. The highlights are Alegría’s landscapes, which depict monolith rocks in the fog, the split lip of a horizon, a black desolate beach, a distant star. James Turrell wrote that he wants his works to trigger a “wordless thought” in the viewers; Alegría’s works trigger a wordless narrative — these works establish the ambiance of ineffable drama, they mark the beginning or end, a gateway to the unimagined.

Alegría’s graphite technique may not seem, initially, as detailed as Thomas or Pena’s, but he is on the same plane of serious draftsmanship. The best pieces in the show appear simultaneously as stark photographs and impressionistic sketches — the lines blur and sharpen in a holographic concert. Here’s hoping Alegría has the opportunity and funding to make something truly grand in scale. His vision, like the best sci-fi, seems boundless.

Mario Ybarra Jr.: “…like a cow visiting a butcher shop…”

At Southwest School of Art through December 1 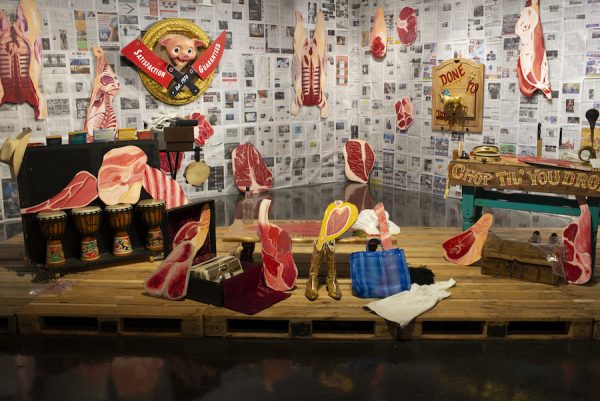 Few events highlight the rapacious role money plays in art as the art fair. Harried, desperate gallery owners spend tens of thousand of dollars to rent a booth and wait in agony; artists’ works are situated like sides of beef, and a few wealthy collectors (or their consultants) yawningly peruse the aisles. Mario Ybarra Jr.’s installation “…like a cow visiting a butcher shop…”, which originally premiered at the ARCO Madrid art fair in 2013, is a savage and hilarious send-up of this dynamic.

“…like a cow visiting a butcher shop…” covers the walls of the main gallery of the Southwest School in newspaper; the work in the show (and by extension the viewers) becomes the “meat” wrapped in paper, as though sold from a butcher shop. Ybarra places garish sculptures of sides of beef with aggressive slogans — Satisfaction Guaranteed, Done to Order, Full Service! — throughout the room. The message is not subtle. You will get slaughtered, but Ybarra provides an impish glee to the predicament. It is, after all, funny — all the pageantry and machinations behind selling art.

The centerpiece of the show is a stage with conga drums, cowboy boots, a bottle of liquor, a piano, knives sticking in to various surfaces. At the original installation in Madrid, Ybarra and others performed on the stage, which is captured in a video that’s playing at Southwest School. Ybarra highlights the absurdity of ‘performance’ — the relentless necessity of performing as an artist in a capitalistic culture — performing one’s work, performing one’s identity as an “artist” when the ultimate best-case result is a kind of annihilation. One’s work is consumed by a collector. 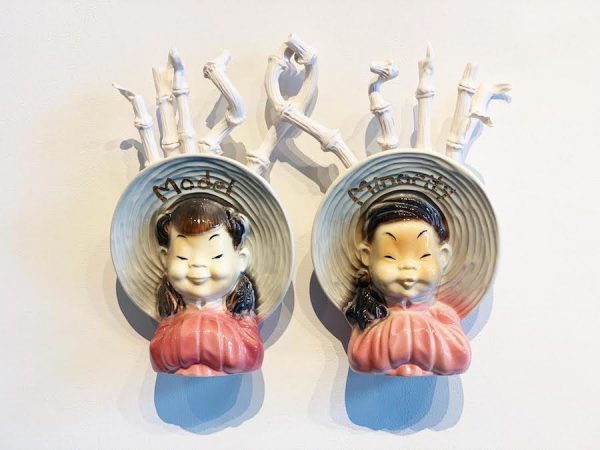 Jennifer Ling Datchuk is a technically skilled multidisciplinary artist who works with a range of materials. In this show she uses symbols of feminine compliance and submission in an act of reclamation to invert their meanings. Datchuk often explores her Asian identity in her work, and crafts Chinese porcelain works that skewer stereotypes and tropes. The pieces in this exhibit are so exquisitely wrought they go beyond merely obliterating the icons of colonialism and patriarchy to a stranger, liminal zone between humor and grief.

There’s a disarming buoyancy to Datchuk’s work. She physicalizes hashtag slogans of self-care (one wall piece reads “Keep your goals away from the trolls.”) as if the content of the phrase were less important than the scaffolding it creates to hold one up. Datchuk writes that this work confronts “little girls … taught to be seen not heard, perpetuating our roles as empty vessels for the desire and fulfillment of men.” Like many of the works on view, the show’s title can be taken as a hinge — on one side it is a cold, silencing directive; on the other a jubilant 1988 song by Bobby McFerrin that became an affirmation for its era. Datchuk does not hesitate to forcibly open the door.

On some level, all photography is manual. A thumb presses the shutter; a finger taps the small white…