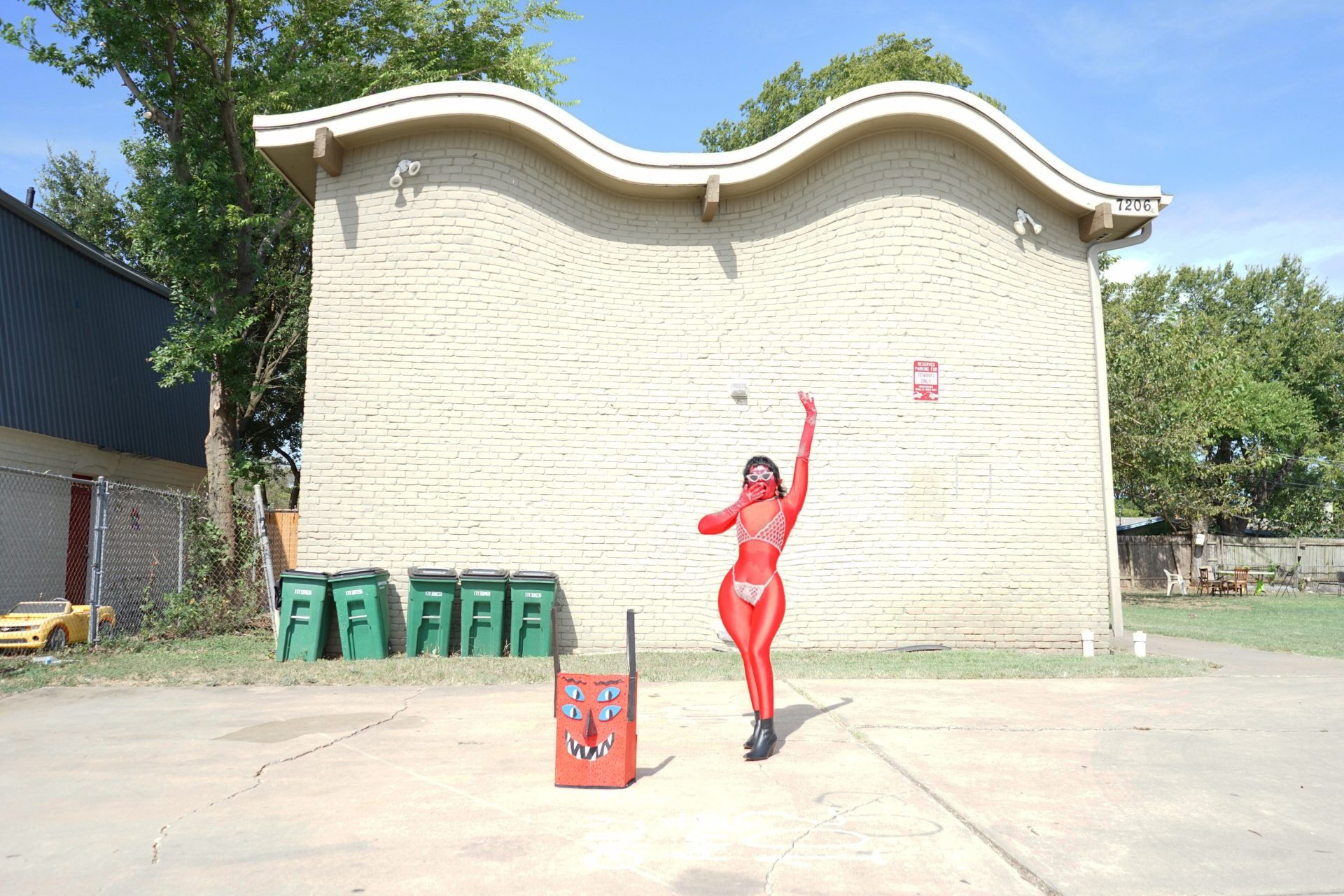 In an Instagram video from drag performer and comedian Andie Flores (@bidibidibummer), she wears a giant gold star — so giant it covers her almost to the waist, her face in the center like a glam version of the Teletubby sun. Her eyes peek out behind giant glasses, hopeful, juxtaposed against glam elbow-length red gloves and a glittery wrist cuff as Flores shimmies to Terry Stafford’s 1964 croon, “I’ll Touch a Star.”

There’s a vulnerable hope in her character’s eyes, as if she’s just hoping the viewer will love her. The effect is exaggerated by the grainy 90s-era Sony Hi8 camcorder it was shot on, made all the more grainy because Flores didn’t transfer the footage but recorded it straight into Instagram. The layered effect between the video, the costume, and the music makes it feel at once of-the-moment and like a distant memory.

It’s surreal, weird, delightful, and also incredibly, divinely stupid. And I mean that as a compliment of the highest order.

Flores has been performing in Austin for years now, in both the theater and comedy scenes, but until she began doing drag shows, she hadn’t quite found a place where her style fit. She’s also known for her portrait work on Payasa, a series of clown portraits she created with visual artist Cynthia Muñoz. A doctoral student in the Mexican American Latinx Studies program at the University of Texas, Flores is primarily known as a drag artist and comedian, but her work genuinely defies categorization in both style and medium. She creates photography, live performance, and (even before the pandemic) video.

It’s comedy. It’s drag. It’s performance art. But that’s the annoying thing about categories and genres: they’re often limiting and beside the point.

What all of Flores’ work has in common, no matter the medium, is that it revels in juxtaposition. In one drag performance, she’s a sexy Ronald McDonald, in another a sort of demented Mickey Mouse with a bra made from Mickey’s iconic gloves. In another, she’s a sexy — glamorous, even — conehead. Often she dresses as other-worldly creatures. There’s demons, aliens, demon-aliens, and intergalactic beauty queens with relatable backstories like heartbreak.

Flores mixes the fantastical and other-worldly with the mundane, using it to tell a story from an unanticipated perspective. Her approach is to photograph herself in character in rote spaces where the visual spectacle is even more unexpected: grocery stores, fast food restaurants, the back lot of a dumpy-seeming warehouse.

I spoke with her over Zoom last October when she explained that her interest in that juxtaposition is about storytelling, even when she’s presenting a single moment in time. “I approach it as trying to tell a character’s cohesive story in two to three snapshots of them in a rote environment,” she told me.

The result brings a bit of magic to otherwise drab parts of life, but it also makes her characters themselves relatable. A sad clown feels just like you when she’s sadly resting her head on a fast food restaurant’s formica table, her bestie at her side.

The abbreviated format allows the viewer to fill in much of the narrative and that’s its beauty. As Flores explained, “You don’t always know if this character is a hero or a villain. You just know their take on this one scene or this one song. I like that ambiguity.”

Taking her self-portraits in public extends Flores’ performance beyond the photographs, and wearing a character mask gives her a greater boldness, allowing her to be at once attention-grabbing and anonymous. “When I leave the house and enter public spaces, I’m very aware of being looked at as a very specific kind of brown body in the world,” she explained. “Sometimes that’s a privilege and sometimes it makes me deeply uncomfortable. It’s nice to dress up as a character and not have to think of myself as, ‘Oh, there’s a Latinx person or a Latinx artist.’”

In many ways, her characters allow a momentary escape from a White gaze, allowing Flores to have full control over the story she’s creating. “The way I move out in the world is a spectacle, but getting in drag and staging photographs is a different kind of spectacle. Maybe even a warmer one. People are very friendly to me when I’m dressed up crazy. Kids love or hate it. People want to take pictures. I love that people will come up and talk and ask me questions,” Flores explained.

“I’m very aware of the space I take up when I leave the house, whether I’m in costume or not,” she said. “And when I’m in costume, it’s like it’s an assumed spectacle for the people. There’s a freedom in not presenting as myself. I become braver.”

In both her photos and performances, Flores often plays with an unruly femininity, pushing sexiness to its logical extreme, as if she wants to break the gaze itself. In one performance, she dresses as a cat inspired by the sexy cat in Hanna Barbera cartoon, “Tom & Jerry,” as she dances to Peaches’ 2000 hit, “Fuck the Pain Away.” Just as the song hits that iconic chorus, Flores pulls off a faux fur coat to reveal six bulbous teets. Then she pours milk into a bowl and downs it. It’s cheeky, to be sure, but Flores goes beyond a sly wink, adding an excess that pushes the sexiness until it becomes joyously gross.

Flores explained what interests her in such characters, saying, “I like giving little ugly goblin evil-doers a chance to feel beautiful.”

“As a woman in the world, I feel expected to perform glamour in certain ways everyday, anyway. So it’s really nice to be messy or gross or disgusting. Why can’t I get applause for being filthy and feeling great?”

It’s a defiance that feels revelatory, and crowds clearly love it.

Flores also likes to use vintage songs in her drag for reasons similar to her attraction to mundane spaces: the chance for re-interpretation. “I’ll listen to an old song from the 50s or 60s and it’s hard for me to picture what someone who looks like me or my family would have been doing to this song at the time. We think of these things as having been popular for everyone.”

With drag, Flores can take that familiar song, add a different script to it or mix it with another song, and then with costumes, lights and staging transform into something altogether new. “It all works together to give you some sort of half story to find an ending to (or a beginning to).”

Of course, Flores hasn’t performed for a live crowd since early March last year. But one thing quarantine has provided her is the chance to get to know her own work process and accept it. “Ideation is my very favorite,” she told me.

Early in quarantine, Flores continued doing drag in digital venues, but found that creating videos required technical skill she didn’t yet possess while live virtual shows robbed her of the post-performance glow.

“Live drag shows [online] are really depressing,” she said. “I’d do a live show, it would be over, and I’d close my camera and look around and I was alone in my apartment.”

Instead Flores has taken time to play in her work without an expectation of a result. She maintains a small studio space at the Museum of Human Achievement and has been using it to explore and make what appeals to her. Sometimes that’s a video, sometimes a photo.

As she writes in her exhibition statement: “I’m excited about digging into the complexities of knowing oneself as a racialized body and general clown idiot.”

An Interview With Andie Flores About Audience, Excess, and Legacy