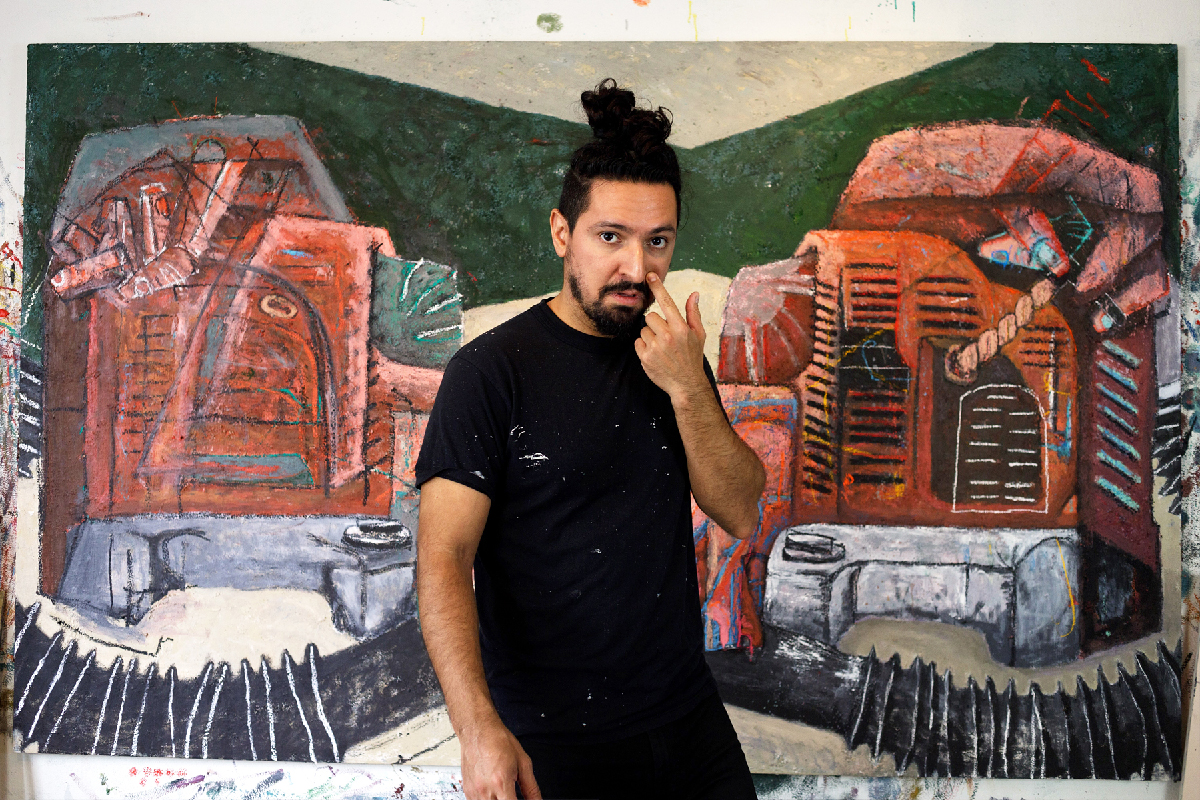 There’s a decent chance you’re unfamiliar with the name John Guzman — but the San Antonio artist is quickly developing into a hometown success story. Raised on the South Side, he slid through East Central High School as a “terrible student,” sang lead vocals in a scrappy punk band dubbed the Cock Blocks and eventually landed a dead-end job at the Apple Store’s Genius Bar. Although he’d always drawn in sketchbooks and occasionally exhibited during Second Saturday art walks, Guzman considered his art to be primarily for his own satisfaction. Encouraged by a friend who recognized his potential, Guzman quit his job and enrolled in the nascent BFA program at the Southwest School of Art. Three years into the four-year program, Guzman began to feel confined by his focus on drawing and printmaking.

“It was almost an uncomfortable, claustrophobic feeling,” he recalled. He decided that painting was the obvious remedy for this conundrum and started experimenting with acrylics. “I just started painting on my own [but] I really didn’t do my homework,” he explained. That became crystal clear when he shared his homespun paintings with professor Daniel Rios Rodriguez. “He completely shot me down. And I’m glad he did, because he kind of knocked me on my ass. He let me know that whatever I was doing, I was not doing it the right way.”

To make up for the foundational homework Guzman had jumped over, Rodriguez gave the aspiring painter a challenging assignment to complete during the summer before his senior year: paint realistic still lifes every day using exclusively black and white oil paint. While Guzman unsurprisingly got bored with what he sums up as “basic, boring shit that no one wants to do,” he took the task seriously and came out on the other side with technical skills and a newfound love for oil paint.

By the time his senior thesis exhibition rolled around in 2019, Guzman had begun developing a signature aesthetic — abstract oil paintings that incorporate representational aspects of the human form. Around this time, Presa House Gallery co-director Rigoberto Luna got a phone call from critic and curator Chad Dawkins, who was then the Southwest School of Art’s director of exhibitions.
“Chad was like, ‘You really need to come and see this show,’” Luna said. “He was really excited. I barely made it through the door before he said, ‘You need to come see John’s paintings.’ I was really blown away. I just felt something as soon as I saw them. … At the time, I couldn’t do a show with him unfortunately because we had already booked the whole year. … And then COVID happened. [But] the entire opportunity allowed us to get to know each other.”

“He was the first person that started to take interest in my work,” Guzman said. “He’s helped me out so much in my life, not just by acquiring paintings but just in general. He’s helped me out [with] the idea of selling work [and] how to properly price my work. … I’m very lucky to have met him.”

Reynolds also encouraged Guzman to apply for NXTHVN — a New Haven-based residency and career advising program tailored for artists and curators of color. Established in 2019, the program welcomed nationally recognized San Antonio native Vincent Valdez as a fellow in 2020.

It took Guzman two years to take the bait but he finally applied for the incubator in October of 2020 and got an acceptance letter in March of this year. Seizing the moment, Luna adjusted the dates for Guzman’s Presa House exhibition, which got teased in the media release announcing NXTHVN’s 2021 fellows. That shout-out from the buzzy new program brought national attention to Guzman and Presa House alike.

“We knew it was going to be a huge deal,” Luna admitted. “It was really difficult to even do the install because we were getting inundated with emails and phone calls from places that we could not believe we were being contacted by. It’s not like anything we’ve ever experienced.”

By the time we arrived at the opening reception for Guzman’s Presa House showcase “I Would Have Killed to Seen It,” a few of his paintings had already sold — including an $18,000 piece titled The sound of making a living.

Two days before he departed for NXTHVN, Guzman walked us through the exhibition to shed light on the assembled works, which are rendered in a layered, textural style that evokes the geometric curiosities of Cubism.

Although not immediately obvious, the show’s six large-scale paintings draw inspiration from Guzman’s personal experiences as a witness to self-destructive behavior and cycles of addiction.

The sound of making a living

“Every week, maintenance men come and do yard work [at my apartment complex] but there’s something about the sound that really bothers me,” Guzman said. “So I decided to just put one of my annoyances in one of my paintings. … It’s two leaf blowers [with] little body parts to inform the human element.” To bond the two humanoid machines, Guzman gave them a shared pull cord, suggesting that one can’t turn on without the other.

“I wanted this piece to have this circular [motion]. I wanted your eye to move with the painting,” Guzman explained. “I tried to add small elements of the human body, but I removed the obvious body parts and just [kept] flesh, skin tone, a heel or a shoe. … I wanted the idea of time … and I came up with [the metronome].” As for that arc of red lines? “I love doing these lines. It’s sort of like tearing paper or popping bubblewrap. It’s a comforting thing to do, but doesn’t really have any other purpose.”

In case of emergency, please exit

“I guess the concept behind this piece is how individuals in the household create toxicity in the home — for everyone,” Guzman said. “The reason I have this [orange strip is that] exit signs are always that orange color. When I was in situations like this, I was always trying to look for the exit.” But is there an elephant in the room? “I get that a lot,” he confessed. “It was not intended to be an elephant. I think our minds engage with that automatically just by association. It’s really just [an] arm [representing] the idea of gyration and destruction.”

“There was a night of a drunken stupor where I went to a ramen joint and I wanted to sit at the bar and drink by myself,” Guzman recounted. “I went with the intention of making titles for this entire body of work.” To his chagrin, he got seated at a table. “But it sort of worked out because I was next to the window and I was able to watch the rats walk by, the critters that run on our streets, sort of like the bandits of downtown. It was pretty cool witnessing the city and drinking bottle after bottle of sake. [The server] asked if I wanted it hot or cold and it was fucking hot that night so I was like, ‘Please give me cold sake. And I need many of them.’” But that title doesn’t exactly speak to the imagery in the painting, which deals with confinement. “I was going to make a chainlink fence … [but it] was too much of a separation. … The faint grid allowed me to recreate this idea of a cinderblock — and being confined in some sort of prison.”