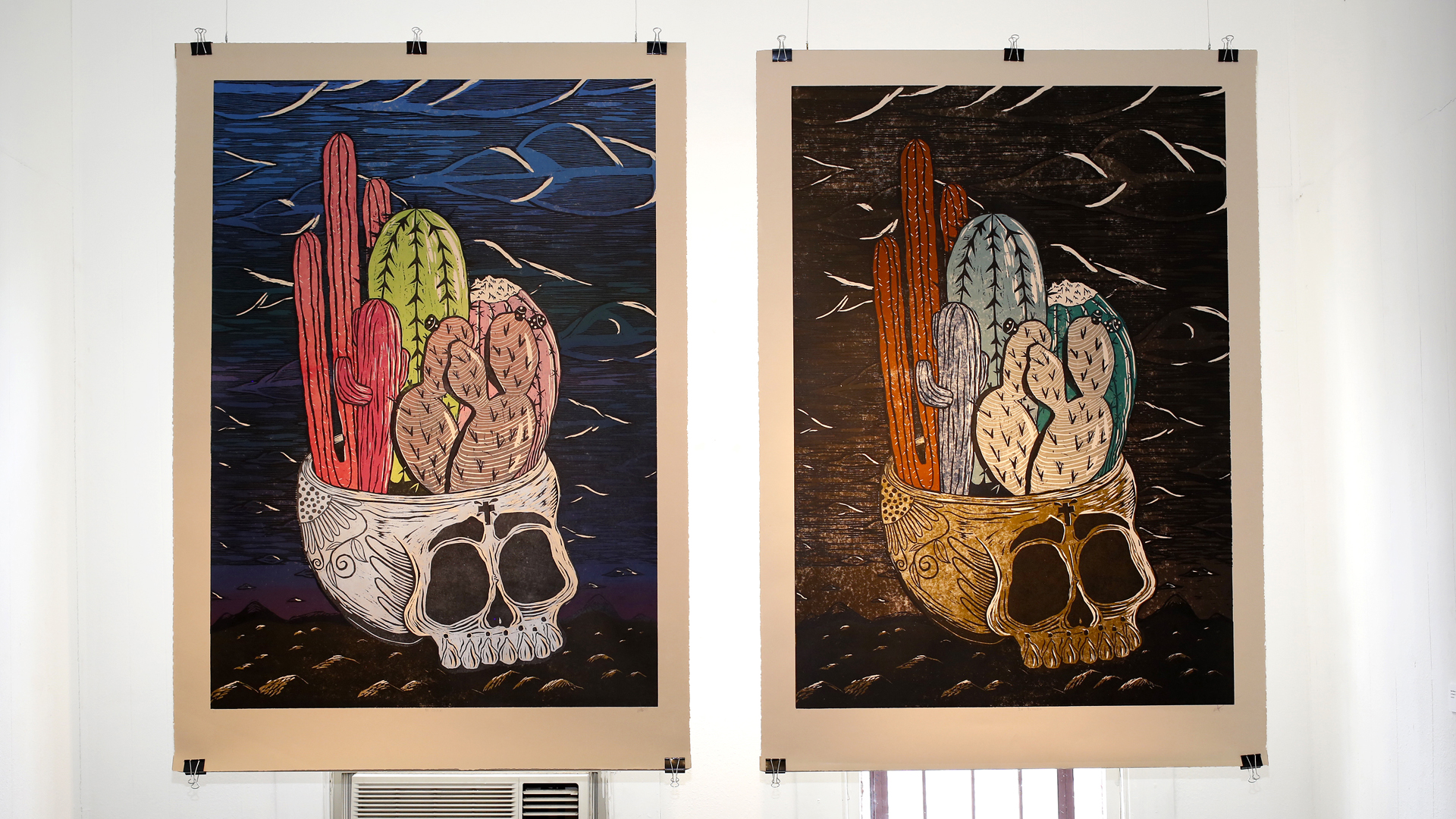 This small but immense show begins inside Presa House Gallery’s entrance hallway, which squeezes you in between two clashing walls: on the left are a number of small prints on colorful handmade paper, and on the right is a single, incomprehensibly large print of a skull pot filled with cacti.

Turning toward the large print and entering the first room of the exhibition, you find yourself face to face with four monoprints, each created from the same woodblock set. They confront you like banners on the walls of a coliseum — monuments of battles past.

In a counter-clockwise direction, each print drums out a stage in the break of dawn, from the pitch black of In Transit to the deep blue and purple of No Chain. A blanket-like warmth of the gradient sky of turquoise, red, and green of Passage finally opens up to the bright, sunny yellow of Fiesta. The skulls on these banners, rattling with the cacti’s thorns in gold, silver, and shades of green and blue, mourn and celebrate the spiraling gravity of life’s journeys. The finale, Fiesta, with colorful bursts of mylar confetti added through monoprinting, signifies a lighter side of life awaiting the ebbs and flows of our darker planetary existence.

This multicolored series was produced during artist Ben Muñoz’s residency at Florida State College at Jacksonville’s printmaking workshop. For the works, the artist used a puzzle block method of printing, as recommended by Patrick Miko. According to Muñoz, the technique resulted in unpredictable shifts in the arrangement of the blocks with each print.

This complex method is elevated by the overlapping impasto- and woodgrain-like patterns in the prints’ skies, which signal the density of Muñoz’s humid, steaming atmosphere. These patterns are interspersed with the Dürer-influenced clouds, filled with negative spaces that hang alien-like in between boundaries of hatchlines. The skies and clouds apply pressure from the peripheries into the colorful centers, a significant departure from the lateral stacking-composition Muñoz is known for.

Crossing Presa House’s center hallway to head into the next room, the odd clash between the entrance walls begins to make more sense. The large print on the right side is Afterhours, with a glowing red sky from the setting sun, which bids you farewell as you venture into the rest of the show.

If the show’s first room was dedicated to battles of the recent past, its next room is centered on reflections on family history as rooted in South Texas. Muñoz’s grandfather crossed the border and immigrated to Corpus Christi, where his family settled and grew. There are works from three different series in this room, with Salvation and Justice and Righteousness representing the earliest pieces (from 2019 and 2020), Heed and Epilogue from 2020, and finally Las Hermanas from 2021. Muñoz’s uses a vertically oriented composition for these pieces to demonstrate the complexities and pressures of family ancestry.

The first series, Salvation and Justice and Righteousness, is muscular, like the unruly, thick Lenox 100 paper on which the two works are printed. They are descriptive of the dense, compacting and contrasting forces that bind a family together, something we may be very conscious of on this Thanksgiving weekend. The prints each show one side of the two traditional biologically-determined gender roles common in culturally conservative societies like South Texas.

The first piece, Salvation, is a maternal figure, whose energies contract to pull the family together. A tower is formed from a densely stacked pile of pallet boxes containing skeletal arms, classical columns with roses wrapped around their lengths, and a couch that supports everything else. A crumbling pile of bricks are gathered atop this base, with a burning heath in the middle — this precarious structure and its warmth are only held together by the contracting arch of the body of a chameleon seated atop the stack. The animal is a safe haven, a dome curving into an immense concave energy that holds everything and everybody together.

The paternal figure of Justice and Righteousness is a literal bedrock of power, judgment, and industry, representing the expansion of energy. Muñoz’s tops this stack with an elephant that carries the burden of livelihood and progress on its back and under its feet. The piece is energetic and gives off an amplified energy that alludes to Muñoz’s family’s livelihood and foundations in South Texas.

The black ink in this series is shimmering and organic, like skin or scales. In this monotone print series, which Muñoz pulled by hand, this black ink is crucial to convey the power and muscle that give the pieces life.

Heed and Epilogue are the most political works in the show: they’re about the experience of family and identity in Texas. The works are dual-tone, large-format chiaroscuro prints in copper and black, and in contrast to the previous series, the black ink in these pieces has a fine, shimmering quality.

Heed is printed on thin Okawara Japanese paper, chosen at the recommendation of Flatbed Press’s master printer Katherine Brimberry. The power of the solid forms in the print’s image struggle against the limp gravity of the work’s paper; the opposing forces are representative of how Texas — or the concept of Texas — is always fighting against itself. The physicality of the print is symbolic of the immense emotional taxation of this internal fight.

The paper has an opposite effect with the other work in the series, Epilogue. Its extra-long, thin, draping stretches of fibers containing red speckles are mirrored in the unfurling gestures of the octopus seated atop an ice cream trolley. At the bottom of the work, skeletal arms rise out of a rocky grave and hold up a garden of flowers. Between the bones of the past and the sweets of the future, the family will divide and conquer. The print describes the immensity of work, experience, and life in Texas in a way that counteracts the ironic, conforming gestures of Heed.

Las Hermanas is the last series in the room. These works are smaller prints, and are meant to represent the future of the Muñoz’s family — each piece illustrates the personality of one of the artist’s young daughters. Florence is a two-tone print in pea green and black. She’s a handful, always testing the rules and boundaries, and is vocal about what she wants — all with an exactitude unusual for her age at four. The younger Jane is quieter, with a personality that is at once fun, adventurous, withdrawn, and pensive. The last print in the series, Daphne, is one of mourning, an homage to all the possibilities and potential of who she could have been. It is also part of Muñoz’s process of mourning and letting go.

Once again, the pieces in the room work themselves into a loop, creating a through line between life’s darkest and most light and expansive moments,.

The last room in the exhibition contains a series of seven chine collé prints, titled Uno through Siete. Each print depicts a smaller version of the scull with cacti from the first series in the exhibition. According to Muñoz, the sculls represent the origin of the Mexica, better known as the Aztecs: seven caves and their corresponding tribes. Their primordial, yet-discovered home, called Aztlán, is thought to be somewhere north of Mesoamerica. This series is meant to convey Muñoz’s appreciation for the “competitive reverence” that defined the social relations between the Aztec tribes that eventually made their way to their capital of Tenochtitlan, the site of present day’s Mexico City.

The series represents the artist’s search for increased social and historical recognition of his roots. Skulls and cacti lie on blank backgrounds in the pieces, ready for deeper, ongoing conversations about their relationships to their ancestral pasts in the context of the brutality of today’s COVID-19 pandemic. And within the actual progression of Munoz’s artistic practice, this is exactly what happens, as the first room’s immense and complex prints are followed up by these smaller, more pointed pieces.

Between the three rooms of the exhibition, the installations represent the history, the modern present, and the passage of cyclical time, which we could call a “future.” This exhibition, Rattled Bones, is about the deep marrow of a Mexican-American family that immigrated to and settled in South Texas.

The family is expanding into North Texas, where Muñoz is now based. The final statement of the show is once again back in the gallery’s main hallway: the colorful handmade paper with partial prints, now recognizable as pieces of the puzzle blocks from the artist’s first series, greet the viewer. They are like the pieces of confetti in Fiesta — marking a full circle from transit, to becoming unchained, to passage, and into celebration.