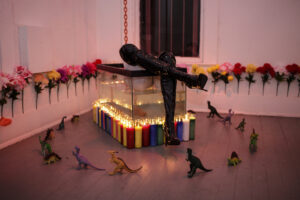 Justo Cisneros is a visual artist living and working in San Antonio, Texas. Cisneros’ work encompasses drawing, graphic design, and installation and has been widely exhibited in galleries, museums, and concert venues throughout Texas. His iconoclastic works challenge traditional notions of sexuality, authority, and liberation and invite the viewer to re-examine their constructed personal identity and public identity as social actors through stark narrative comparisons of freedom and control.

Cisneros’ latest site-specific installation, Through Rose-Colored Glasses, will be rendered through various natural and artificial materials configured to activate a full sensory experience and engage the viewer on multiple levels. Through the use of modified objects such as flowers, toys, fish, and artificial limbs, viewers will experience and become part of the artwork themselves.

My goal is for people to encounter then transcend this synthetic work as a real life depiction of experiencing love through rose colored glasses. 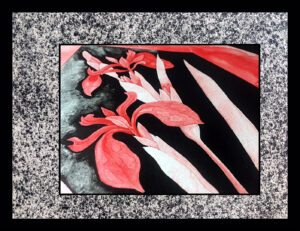 Eric Mathis is a native of San Antonio, Texas who earned his Bachelor of Fine Arts degree at Texas State University in 2011. Mathis has exhibited in San Marcos, Austin, and San Antonio including an upcoming exhibition at the McNay Art Museum. Traditionally a painter, draftsman and self-proclaimed mark maker, Mathis’ work often delves into a variety of techniques and mediums.

In his latest exhibition, Stems, Mathis investigates the aesthetic experience of objects presented in non-traditional formats. Through subtle surface manipulations, composition, and color, Mathis hopes to engage the viewer with the examination of patterns in nature and the mathematics within them.

Stems are rooted; sustained by the ground around them; supported by foundations that nurture their growth—connected intrinsically to an invisible force, following a pattern of death and rebirth. Wilting and blooming. Similarly, we are rooted by our beliefs and perceptions, dictated by inevitable mortality, poised in our faith to prolong our spirit. Is it the search for heaven or the avoidance of hell that motivates our movements, our cycle? 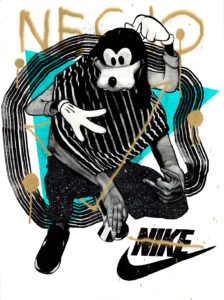 James Supa Medrano is a self-taught artist and illustrator born and raised on the west side of San Antonio, Texas. Interested in art from an early age, Medrano was introduced to graffiti in his teens and quickly discovered his artistic potential. Medrano’s most recent work has evolved into figurative illustrations inspired by pop culture, the ’80s & 90’s television and films, advertising, and consumer goods. Through the combination of acrylic, spray paint, and ink, Medrano’s work features obsessively hand-drawn figures, cartoon characters, and frenetic graffiti juxtaposed against stark white backdrops.

I wanted to address society’s bad habits that have been accepted, such as obesity, vandalism, and alcoholism. Our local convenience stores are a prime example of our overconsumption associated with all those factors—a common ground for all social classes to grab their quick fix and feed their vices.