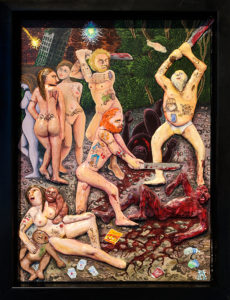 A prolific draftsman and painter, Alvarez’s layered and meticulously composed works depict his acute observations of ordinary life and various complex subjects. Alvarez’s work is heavily influenced by the principles of Ancient Chinese painting and calligraphy and the iconic woodblock prints of the Northern Renaissance, particularly those of Albrecht Dürer. In his latest works, Alvarez reflects on the human ego, relationships, birth, and death. Alvarez’s work has recently been exhibited at Centro de Artes, Galería Guadalupe, and is in the permanent collection of the San Antonio Museum of Art.

I think we’re living in a sick world that has been subconsciously trying to cure itself through art, to rid itself of its overlords once and for all; we’re about 200 years from Utilitarianism- the eventual direction of the planet. 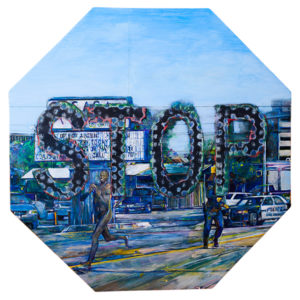 Saavedra’s reverence for ambiguity, nuance and historical context inform his painstakingly crafted paintings and assemblages. Saavedra’s work stuns visually while playfully inviting sociopolitical reexamination, never hesitant to tackle unpopular subject matters or spotlight the overlooked. In addition to his practice, Saavedra serves as FL!GHT Gallery’s “Senior Creative Co-Conspirator,” a position he’s held with the celebrated art space for twelve years. His work has been exhibited on three continents and featured in the McNay Art Museum, Institute of Texan Cultures, Blue Star Contemporary, Museo de Arte Moderno, Mexico City, MX; and is in the permanent collection of the San Antonio Museum of Art. His work has also been published in Art Lies: A Contemporary Art Journal.

It was fifteen years ago July, in the midst of my first accidental one-person show, that another artist, Presa House’s Rigoberto Luna, invited me to be in a group show (my first) he was organizing for the next month. Happy Anniversary, Rigo!