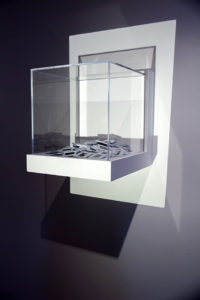 Tere Garcia is originally from Monterrey, NL. Mexico. She graduated from the University of Houston with a BFA in Photography and Digital Media and is currently pursuing her MFA in Photography at Parsons the New School for Design in New York City. Garcia works in a variety of media such as video, sculpture, installation, traditional and digital photography. Her work employs conceptual and performative tactics to intervene in the photographic processes of cognition and to question the image as the repository of meaning. Her work intervenes in the image making process in order to destabilize the ground upon which it rests. “I aim to complicate the textuality of an image, how it is read, by exposing and complicating the space it seeks to naturalize (Garcia).” She has exhibited at The Houston Center for Photography, Blaffer Art Museum, Box 13, HCC Central Fine Art Gallery, Fotofest participating spaces, Rudolph Blume Fine Art Gallery, Los Angeles, CA and New York, NY.

In Traces, Garcia asks where the photograph is located. The slide is no longer an unseen element through which the light passes, instead the carousel projector light now frames and exposes the slide as the material container of the image, and so questions the primacy of the image in the photographic process. The slides contain documentation of performances, events in the studio between the artist and the camera, in which an intimacy is explored that the artist then refuses to represent, reproduce or reveal to the audience. The lack of visibility questions modes of representation and challenges the privileged position of the viewer. 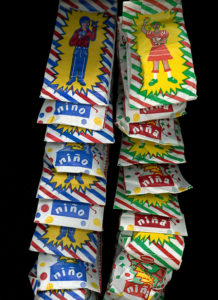 Maureen Penders is a Salvadoran artist, curator and educator. She received her BFA in Photography and Digital Media from the University of Houston and is currently based out of Houston, Texas. Penders’ creative practice is mainly framed in traditional photography and explores the social construction of home, intersectionality of identity and gender expression. She is a member of the artist collective Mujeres Malas, and a part of El Rincón Social, an art studio dedicated to elevating artistic voices of color since 2015. Penders has also worked with FotoFest International as a volunteer and Special Projects Coordinator, and also as an educator through FotoFest International’s community-based education program, Literacy through Photography. Additionally, Penders has curated several exhibitions including her most recent project, El Chow: Fruto en vaina, a group exhibition exclusively created with the intent of upholding latinx women and queer artists.

In Cultura, Penders comprises images culled from objects representative of El Salvador. Penders showcases material culture that is specific to Central American identity, yet appears in many Latin American countries. The objects are linked to their homeland not by their visual appearance but by the language surrounding their usage. The Salvadoran identity of the objects becomes apparent only when the subtleties of their articulation are made clearer. Cultura presents lens based work in which the lens is pressed against its subject. The geographical distance between the artist and El Salvador, inverted in the extreme proximity of the image, as the subject and object balance on a pane of glass.

Under Pressure \ Labor of Love