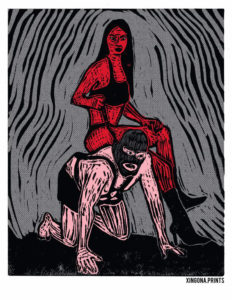 Known widely by the pseudonym ‘Xingona Prints,‘ artist and printmaker Sabrina Alfaro was born in San Antonio in 1988. A 2015 Cum Laude graduate from the University of Texas at San Antonio with a Bachelor’s of Fine Art, Alfaro has steadily built a presence in the city’s arts scene. Her works have been featured in galleries throughout Texas including Clamplight Studio, Lullwood Studio, and Mexic-Arte Museum in Austin, TX. Xingona is a word used in the Latin-X culture to describe a person that conquers adversity, works hard, and is unapologetic, Alfaro adapted the nickname Xingona to characterize the risk-taking and boundary-pushing in her artwork, as well as her drive and hustle as an artist. Additionally, Alfaro has served as a printmaking instructor for youth artists throughout San Antonio, including San Anto Cultural Arts, SAY Si, and Southwest School of Art. In 2016 Alfaro assisted in organizing and curating Paper Trail SA, an open art market dedicated to artists selling paper goods. 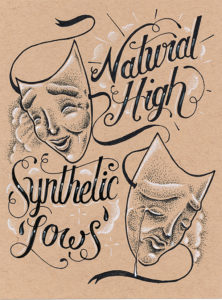 An accomplished Los Angeles-based artist, Benjie Escobar’s work and his aesthetic reference an expansive collection of influences including his childhood in Pomona, the 90s, raves, lowrider culture, streetwear, graffiti, typography, illustration and graphic design, all viewed through the lens of Chicano art tinged with snarkish humor. His latest work is focused on repurposing, reimagining, and updating iconic Chicano & Latino characters as well as works that showcase his signature hand-inked lettering. The collection, as Escobar explains, “embodies some of the deeper meanings” in his rocky personal journey over past year as he achieved new highs and lows in the realms of love and finances. Escobar’s work has been featured in group and solo exhibitions both nationally and internationally, and has been published in numerous magazines and clothing labels. In addition, Escobar also curates exhibitions, builds vintage Schwinn Stingrays, invents new zine genres, and art-directs gourmet burger festivals. 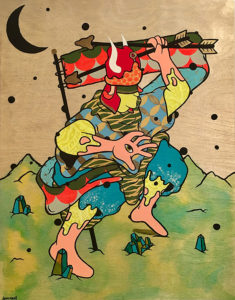 Chances are if you’re walking around town you’ve probably seen Gilbert Martinez’s work. A native of San Antonio, Martinez aka ‘For Real‘ is an prolific artist, illustrator and printmaker. Best known for his sticker art and screen-prints, Martinez has recently transformed his unique illustrations from slap up stickers to skateboards, posters, printed apparel and more. As a youth, Martinez discovered skateboarding and art simultaneously, and both have continued to be major influences for him. Martinez’s work is inspired by his environment both present and past, often blending humor with childhood references from television, movies, and popular culture.