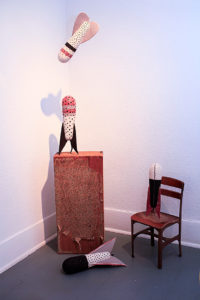 Verena Gaudy (b. Graz, Austria) showcases a selection of contemporary, political, and socially-driven ceramic works. Gaudy craftily creates delicate sculptures in porcelain and earthenware to shape her critical view of subjects ranging from the election of Donald Trump to the expendability of the weapons industry.

Gaudy asks, How much are we affected by political changes, presidential elections…? And how can we as individuals resist spreading hate and intolerance under such strong political dividing forces? 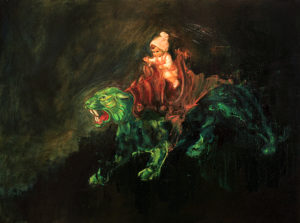 Patricia Guerrero’s (b. San Antonio, Texas) collection of expressive oil paintings explore the idea of childhood memories that are often lost or incomplete. Guerrero’s subjects are an assortment of found, used, and unwanted secondhand toys. Many of her subjects show signs of rough or violent handling, often missing limbs—pulled, cut, or bitten off—and others are worn so gently that it’s clear that they were lovingly handled over a period of many years.

Guerrero explains, Pretty dolls in pristine condition bore me—I’m interested in those whose bodies and expressions show evidence of their lives with their owners. 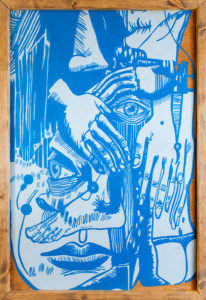 Ashley Mireles’ (b. San Antonio, Texas) constructs illustrative narratives based on her environment and concerns that at times include all or no relationship to identity, love, and extraterrestrials. Through a combination and overlaying of sketches, Mireles assembles fragmented works that continue in a consistent transformation that often later become the basis of serigraphs, relief prints, paintings, and installations.

What you have is me playing around with two or more ideas in each format, making smaller stories to figure out the larger story or how they work together. It’s a lot like paper dolls.